OSOAmil is a 501(c)3, non-profit tax-exempt organization, whose mission is to honor our Military, Veterans, Reserves, Wounded Warriors, First Responders, Gold Star Families, and Blue Star Mothers, and their families by supporting them with programs designed to provide assistance within everyday life and letting them know the many sacrifices of both the families and those serving are appreciated.

OSOAmil was established in 2006 by Kimberly Felshaw after being assisted by a local church in 2005. January 2005, the Felshaw’s were invited to attend a baby shower held by the South Shores Church located in Monarch Beach California, while her spouse served on active duty with the United States Marines. At this shower, they were assisted with everything they would need for the arrival and care for their first child Allysa. Shortly after the shower, their daughter Allysa arrived. She was six weeks early and diagnosed with a terminal disease called Trisomy 13 and lived for three short weeks. Members of the South Shores Church assisted the Felshaw’s by opening their hearts and hands to them in their time of need.

Their kindness and generosity inspired Kimberly to begin Operation Showers of Appreciation. OSOAmil assisted their 100th family in July 2008 and assisted their 200th family at their Annual Twenty-Nine Palms shower in 2009.

In July 2010, OSOAmil expanded their services to Marine Corps Mountain Warfare Training Center Bridgeport assisting 10 new and expecting military moms. This was the first annual event aboard this base and was a huge success due to donations by Lincoln Military Housing and the local Lions Club.

In 2011, OSOAmil branched into Nevada assisting more than 120 new and expecting military families. With the support of the local community, this was our largest event to date. Our goal is to continue our Nevada showers making them an annual event to support even more military families aboard Nellis Air Force Base and the Nevada area.

In 2012, OSOAmil has been able to make huge jumps across the country with our first East Coast shower held in North Carolina assisting families stationed on or near Fort Bragg. This shower was a great success allowing us to add additional showers in Colorado, Arizona, California, Hawaii, and Nevada to our 2012 calendar. We are happy to say that we have helped over 3500 military families to date and counting.

2014 we continued partnering with San Diego Spine and Rehab bringing more showers to the Southern California area in addition to our already scheduled annual events, held our first Virginia shower, and began offering our services to our nation’s First Responders and their families.

2015 we continued with our group military baby showers and programs and held our first annual Veteran Caregiver Appreciation Luncheon. We also assisted more Veterans and Wounded Warrior Families in 2015 than ever before. 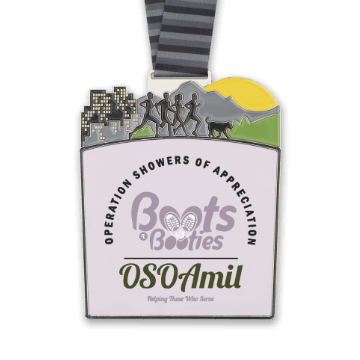 Results
ENTER YOUR TIME
Be the first to enter your time
DID YOU KNOW?
You are a part of a wonderful community of Gone For a Run Virtual Race Series runners from all over the world. Together we embrace our passion for running, health and giving back. Be sure to join our community on Facebook and meet your fellow runners, share your love for the sport and ask our trainers and coaches questions.
YOU AND THE COMMUNITY OF GONE FOR A RUN VIRTUAL RACE RUNNERS HAVE...
Run Over 100+ Races
Are 80,000+ Runners Strong
Have Run Over 400,000 Miles
Raised Over $100,000 For Charities
LET'S CHAT!
SHARE YOUR PHOTO
Three ways to share your photo with us:
Post your photo to our Facebook page and submit your photo by posting to our wall
GoneForaRunVirtualRaceSeries
Post your photo on Instagram using our event hashtag
#GoneForaRunVirtualRaceSeries
Submit your photo via email
support@goneforarun.com
See
Our Current
Virtual Races 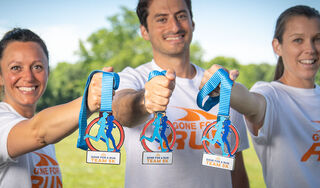 Gone For a Run can create a running event package for your group. Whether you are a running group of 10 runners or a corporation looking to host a wellness run/walk for over 1,000 people we can customize a medal and race swag package. Virtual and live race events are the ideal way to promote exercise, raise awareness for causes and support and celebrate community.
Custom medals
Access to 1000+ add-on swag
Custom bibs
Gone For a Run 10 years of experience
LEARN MORE